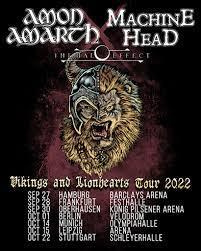 Heavy metal is a way of life, but it is not for the faint of heart. The history of metal is strewn with fading memories of bands that fell apart when times were tough. But history is written by the victors, and Amon Amarth have been marching purposefully from triumph to greater triumph for the last two decades. Formed amid the fertile Swedish metal scene in the mid ‘90s, these dedicated diehards brought a new sense of drama and destruction to the world of heavy music, propagating tales of Viking mythology and mortal combat over a devastating soundtrack of crushing rhythms, refined melody and rousing, rebellious refrains. From the release of their debut album Once Sent From The Golden Hall in 1998, Amon Amarth’s trajectory was firmly upward, as this band’s devotion to touring the world and spreading their inspirational creed began to resonate with ever-growing hordes of like-minded metalheads, first across Europe and then, in true Viking style, across the Atlantic and into North America.

With each successive album, Amon Amarth’s reputation grew; their arsenal of heroic hymns gaining strength and depth at the same time. Perhaps the most significant breakthrough came with cast-iron classic Twilight Of The Thunder God in 2008, wherein the band – vocalist Johan Hegg, guitarists Olavi Mikkonen Johan Söderberg, then drummer Fredrik Andersson and bassist Ted Lundström - seemed to perfect their formula of pulverising, fists-in-the-air anthems and shift into a higher creative gear. The impact was immediate and vast, and since that moment they have been unstoppable, as Surtur Rising (2011) and, most recently, Deceiver Of The Gods (2013) consolidated that success and took Amon Amarth’s explosive and exhilarating live show around the world many more times, and in front of ever-multiplying audiences.

Once again waking from their post-victory slumber, Amon Amarth are due to return with their most monstrous and spectacular album to date. A tour-de-force of cinematic melodic metal that combines the best of the genre’s traditional wing with modern heft and heart, Jomsviking is a concept piece inspired by the elite Viking mercenaries of its title, conceived and written by Johan Hegg and brought to life by the band which for the recording sees drummer Tobias Gustafsson [ex-Vomitory] slotting in neatly as a special guest session drummer.

“Deceiver Of The Gods was very successful for us and we had a good run with that and did some really great tours,” says Hegg. “Even before we changed drummers for this record we had the idea to make a concept album. It was something we’d never done before and it gave us a challenge. I started writing the story, went into it wholeheartedly and once you start going down that path there’s really no turning back.”

By far their most ambitious project to date, Amon Amarth’s tenth album unfolds like a synapse-melting multi-dimensional epic, with countless moments of classic metal grandeur and deathly aggression but also a newfound mastery of atmosphere and evocative dynamics that perfectly compliment the highs, lows and furious battles of Hegg’s narrative.

“It’s a pretty simple story where a young man is in love with a girl but unfortunately she’s being married off. He accidentally kills a man when this happens and he has to flee,” the frontman explains. “But he swears to have revenge and win her back. He can’t let go of the past. He feels that he’s been wronged and his life has been destroyed. The story of the Jomsviking is the background - it’s the way he finds to go back and claim his revenge. The way the story evolves is not a happy story… it’s a tragedy, I guess! But I like sad endings, because they’re the ones that affect you the most.”

Veering from the thunderous attack of opening statement First Kill to the victorious heavy metal sing-along of Raise Your Horns and on to the brooding drama of the closing Back On Northern Shores, Jomsviking sounds colossal – thanks, once again, to the supreme talents of producer Andy Sneap – and confirms that Amon Amarth are bigger, bolder and better than ever before in 2016. Neither deviating from their trademark sound nor restricted by it, they have simply evolved to the next level of metallic might, broadening their sonic horizons while simultaneously glorying in their cherished metal influences.

“When you write an album like this one, you’re basically making music for a movie,” says Mikkonen. “You have to follow certain moods and we had to figure out where we needed the aggressive songs or the more mellow or sad moments, and then we had to find the right ideas for that. It was difficult and it was challenging, but it was more fun! Before we were writing typical Amon Amarth songs, but this time we felt like we had to write something different. After ten albums you really need a challenge. We rose to the challenge and we’re really proud of what we’ve created.”

Bolstered by the regal presence of legendary heavy metal vocalist Doro Pesch, who duets with Johan Hegg on the heart-rending squall of A Dream That Cannot Be, Jomsviking flies the flag for authentic, red-blooded and unapologetic heavy metal while skillfully tapping into metalheads’ unerring love for epic tales of heroism, struggle, love, death and glory. Plainly the finest record of their career to date, Amon Amarth’s tenth album is certain to thrill and delight their global fanbase while the irresistible allure of Jomsviking’s cinematic heart will surely draw many more people into this band’s extraordinary sonic world. This campaign will not be stopped: 2016 will be the year that Amon Amarth conquer the world like never before.

“We just want to be more,” Mikkonen concludes. “Bigger shows, more production, everything bigger and better. I’m pretty sure it’s gonna be that way too. There’s a very good vibe in the band and I think it’s gonna be one hell of a year.”

“The shows are always absolutely fantastic,” Hegg enthuses. “When you’re onstage, performing, whether it’s a festival or a club, and you have that connection with people and you feel that reaction to all the hard work you’ve put in, that’s when you know that all the hardships you’ve experienced over the years were worth it. We are still growing. We grew with each album and we were never a trend. We’ve never followed trends and no trend has ever followed us. We’re on our own. We do what we love. There are so many shows planned in 2016 that it’s almost insane, but that’s what we live for.”