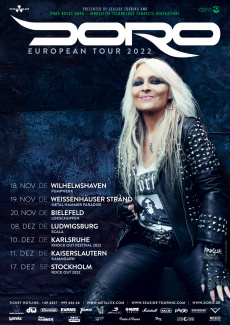 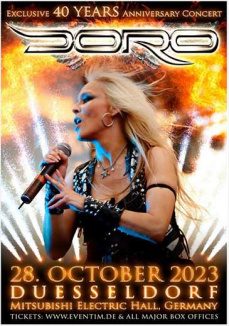 After Warlock went through many line-up changes, Pesch was left the only remaining original member of the band. Because of legal issues with their former management about the ownership and trademark on the Warlock name, she was compelled to release under the name Doro what would have been the fifth album of the band.

Pesch now pursues a solo career and lives in New York City. The 2004 album Classic Diamonds was a collaboration with The Classic Night Orchestra, which reworked some of her earlier songs. Her latest album is Fear No Evil, which was released in 2009.

The first recording produced by Doro was a 7 track demo with one of her earliest bands, Snakebite, in 1980. In 1981 she became a member of the group Beast, but in 1982 she left the band to join Warlock. In 1987, after Warlocks fourth album, Triumph And Agony, and after many line-up changes within the band, Doro Pesch remained as the only original member of Warlock. 1989 saw what wouldve been the 5th Warlock release come as Doros debut solo album. Force Majeure.

Her ten year contract with Polygram expired in 1995, after which she signed with WEA (now Warner Music Group). In 1995, Doro made her acting debut on the German television program Verbotene Liebe (Forbidden Love). After the "Love Me In Black" tour in 1998, Doro parted ways with WEA and signed with SPV/Steamhammer. She also signed a U.S. deal. In 2000 she sang a ballad with Lemmy called "Alone Again" on the album Calling the Wild.

In 2001, she had a guest appearance at the Wacken Open Air festival and performed the song "Too Drunk To Fuck" with Holy Moses. In 2002, she composed the song "Fight" for her friend Regina Halmich. In the Year 2003, she has performed with Udo Dirkschneider as U.D.O. feat. Doro Pesch and published the rock ballad "Dancing with an Angel". She sang live at Ministry-Antella, Florence in Italy on 25 March 2006 with Jorn Lande, performing the song "All we Are".

In 2004, Doro was live on stage with Dirk Bach performing the song "Gimme Gimme Gimme" on the Abba Mania Show of RTL Television. She performed with Blaze Bayley a classical live version of "Fear of the Dark" in 2004 at Wacken Open Air with strings and acoustic guitars. In 2004, she had a duet with Twisted Sister on their album A Twisted Christmas; she sang the German part of "White Christmas".

She has recently signed with AFM Records. In 2006 Doro stars as "Meha" in the film "Anuk-Der Weg des Kriegers" shot in Switzerland and directed by Luke Gasser. Pesch was a guest singer on the After Forevers self-titled album, adding her vocals on the song "Who I Am.".

On 27 June 2007, Doro headlined the very first Flight of the Valkyries female fronted metal festival in St. Paul, MN, USA. She performed live on Metal Female Voices Fest 5 in Belgium in 19 October 2007, and performed the song "All we Are" with Sabina Classen from Holy Moses.

Doro played live at the Magic Circle Festival 2008. She has also provided vocals for the track "The Seer" with Tarja Turunen on her limited edition The Seer EP. On 13 December 2008 she performed with the Scorpions, the bands classic "Rock You Like a Hurricane" and solo with Klaus Meine the song "Big City Nights". Also in December 2008 Pure Steel Records released the first official tribute to Warlock and Doro.

In 2009, she wrote the Wacken Anthem for the 20th anniversary of Wacken Open Air festival. The song was released on 30 July 2009 at W:O:A and was performed by her and Wacken-organizer Thomas Jensens ex-band Skyline. In 2009, Doro also toured the UK with Saxon. In 2010, she was on tour as opening act for Motörhead and she sang backing vocals for their classic tune "Killed by Death".

Doro sang also for Saltatio Mortis the background vocals for "Salome" alongside with Alea.

After several concerts together with the band Krypteria in 2009 and 2010, Doro delivered co-lead vocals for the song "Victoria" on Krypterias 2011 album.