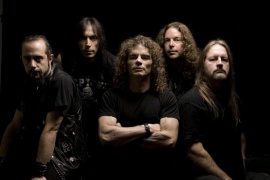 Overkill is an American thrash metal band, formed in 1980 in New Jersey. They have gone through many line-up changes, with singer Bobby "Blitz" Ellsworth and bassist D.D. Verni remaining from the original lineup. Along with Anthrax (whose one-time lead guitarist, Dan Spitz, was also an early member of Overkill), the band is one of the most successful East Coast thrash metal bands. The band has a notable mascot named Chaly, a skeletal bat with a skull-like face, bony wings, and green eyes. Chaly has appeared on most of their album covers.

To date, Overkill has released 16 studio albums, 2 EPs, 2 live albums and a "covers" album. They were one of the early thrash metal bands to sign to a major label (Atlantic Records, in 1986), though Overkill would not achieve commercial success until they popularized "thrash" in the late 1980s with their contemporaries Anthrax, Exodus, Metallica, Megadeth, Slayer and Testament. The bands most successful records are Under the Influence (1988), The Years of Decay (1989) and I Hear Black (1993), which debuted at #142, #155 and #122 respectively on the Billboard 200 charts. Their latest studio album, The Electric Age (2012), debuted at #77 on Billboard 200, making it Overkills highest ever chart position in the United States.

Overkill was formed in 1980 from the ashes of the punk band "The Lubricunts", featuring Rat Skates and D.D. Verni. Verni and Skates placed an ad looking for a guitarist and singer which was answered by singer Bobby Ellsworth and the first incarnation of Overkill was formed.

After rejecting several names, including "Virgin Killer", the band finally settled on Overkill.

Early covers, especially those done under the "Virgin Killers" name, were punk songs by The Ramones, The Dead Boys and others. By late 1980, the band had recruited two guitarists, and the setlist was made up of songs by bands such as Motörhead ("Overkill", half of the Ace of Spades album), Judas Priest (Tyrant was their closer), and Riot. Along with the new influx of heavy metal covers, the band still played a smattering of punk covers, with extra distortion, intensity, and speed.

In 1981, guitarists Rich Conte and Bobby Gustafson joined the band.

At this point, the band started writing original songs, including "Grave Robbers" (later renamed "Raise The Dead"), "Overkill", and "Unleash The Beast (Within)". More songs would follow, including "Death Rider" (1981) and "Rotten To The Core" (1982). In 1983 Conte left and Bobby Gustafson remained as the sole guitarist.

The band became a staple at New York and New Jersey clubs, such as LAmours.

Verni gave Ellsworth the nickname "Blitz" due to his over-the-top lifestyle.

In 1983, the lineup of Rat Skates, D.D. Verni, Bobby Gustafson and Bobby Blitz, released the Power In Black demo, a recording that made as much impact in the underground tape trading circuit as demos by up-and-coming Bay area thrash bands like Exodus and Testament.

The band was also able to secure a small recording deal with Azra/Metal Storm Records that resulted in the 1984 four track EP Overkill, that quickly sold out, instantly pushing the band to the forefront of the fledgling thrash metal movement.

Though it is said that the band never saw any money from the release, the Overkill EP garnered the band massive underground interest, and the attention of Jon Zazula, the owner of Megaforce Records, one of the most prominent independent heavy metal record labels at the time.

Megaforce signed Overkill to a new multi-album record contract and released their full length debut album Feel The Fire in 1985. Hailed by many critics and fans as a thrash metal masterpiece, the album cemented the bands position as one of the driving forces of the east coast thrash movement.

The band spent the better part of 1985 and 1986 touring in support of Feel the Fire, beginning as support act for Megadeths "Peace Sells" US tour and later in Europe with Anthrax and Agent Steel.

1987 marked the release of Overkills second album Taking Over, the first to be released by Megaforce in cooperation with the major label Atlantic Records. The album featured improved song writing and production and had a somewhat more epic style, showcased in such songs as the anthemic "In Union We Stand". The song was chosen to be Overkills first music video, used to promote the band through the booming new medium of music television. Another European tour followed, this time opening for Helloween.

In late 1987, the !!!Fuck You!!! EP was released, consisting of a studio recording of "Fuck You" as well as a handful of live tracks recorded earlier that year in Cleveland.

1987 also saw the departure of drummer Rat Skates. He was replaced by Mark Archibole for a few gigs, then on a permanent basis by European drummer Bob "Sid" Falck previously of Paul DiAnnos Battlezone.

Overkill released the follow-up to Taking Over, the aptly titled Under the Influence, in 1988. Once again produced by Alex Perialas, Under the Influence was much more raw and thrashy, lacking most of the grand and epic atmosphere of its predecessor. Suffering from rushed writing and production, the album is often regarded as a snapshot and a step backwards for the band. The song "Hello From The Gutter" was released as a single, and the music video gained regular airplay on MTVs Headbangers Ball. Overkill kept up constant touring all over the world, furthering their reputation as one of the most active live metal bands.

Overkill released their breakthrough album The Years of Decay in 1989. It was recorded with famed producer Terry Date (Pantera, White Zombie, Soundgarden) and featured the bands best production to date. It mixed the raw approach of "Under The Influence" with more complex song structures and epic elements, resulting in a more serious atmosphere and longer songs, including the eight minute title track and the ten minute "Playing With Spiders/Skullkrusher." The uptempo thrasher "Elimination" was released as a single and the music video again received regular airplay on MTVs Headbangers Ball. The song became a fan favorite and would be played live at every show, even 20 years later. Live support of The Years of Decay took place, in part, on a tour called "Dawn Of The Decade" together with label mates Testament. And the album has sold 4 million worldwide.