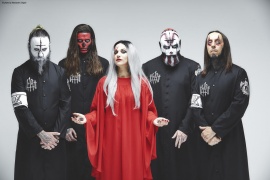 Lacuna Coil is an Italian gothic metal band from Milan. Since their formation in 1994, the group have had two name changes, being previously known as Sleep of Right and Ethereal. Inspired by the combination of gothic imagery and music, the members have been known, musically, for composing midtempo songs consisting of prominent guitar lines and contrasting dual female/male vocal harmonies to help create a melodic, detached sound. Much of the bands recent material, however, sees a heavier and more down-tuned style, featuring a more distinct bass line and a higher mixing of the guitars within the songs. The bands 2012 release, Dark Adrenaline, peaked at number 15 on the Billboard 200. As of March 2012, Lacuna Coil has sold over 2 million records.

Vocalist Andrea Ferro and bassist/composer Marco Coti Zelati formed Sleep of Right in Milan, Italy, 1994, and recruited Raffaele Zagaria on guitars, and Michaelangelo on the drums. After releasing two demos, Bleeding Souls and Noise of Bolgia, Claudio Leo became the bands second guitarist, and Leonardo Forti replaced Michaelangelo on the drums after his departure. The band asked Cristina Scabbia, a friend, to sing background vocals briefly, which led to her officially joining Sleep of Right. Soon after, the band changed their name to Ethereal, and signed to Century Media at the end of 1997. Finding that the name Ethereal was already taken by a Greek band, they changed their name to Lacuna Coil, which in English means empty spiral.

Lacuna Coil released a self-titled EP through Century Media in 1998. Shortly after, there came the departure of bandmates Raffael Zagaria, Claudio Leo, and Leonardo Forti. As a result, guitarist Cristiano Migliore and drummer Cristiano Mozzati were recruited officially. At this point, the band was touring with Moonspell after the release of the Lacuna Coil EP.

Following a second European tour, the band recorded their debut full-length album, In a Reverie, and added second guitarist Marco Biazzi. The band supported the album with another European tour, co-headlining with Skyclad. Allmusic rated the album 4 stars, saying it was "a fine debut by a band that bears watching." The band toured much more, participating in Milans Rolling Stone magazine-sponsored venue, plus as a show headlined by a German band.

Following the debut, In A Reverie, Half-Life was released in 2000 with five songs, entitled "Half Life", "Hyperfast", "Stars", (A cover of a Dubstar single), "Trance Awake", and a demo version of a future song, "Senzafine." "Senzafine" was added onto the bands next big project: their 2001 album Unleashed Memories. The studio album only had ten songs on it, but a future release included the five songs from the Halflife EP.

The band was in for a change for the better when its breakthrough album, Comalies was released in 2002; it received high reviews from certain corners of the metal world. A significant player on Europes metal scene for nearly a decade at this point, the band was virtually unknown in the U.S.A. until it began touring there. Uranium gave the band some of its earliest U.S. exposure; over a year later, the first single from Comalies, "Heavens a Lie", began to receive radio and media attention, pulling the band into North Americas musical mainstream. Networks such as Fuse played the songs video, for example. In early 2005, "Heavens a Lie" won in The 4th Annual Independent Music Awards for Best Hard Rock/Metal Song. The beginning of this song was also used as the introduction music for the audio podcast novel, The Rookie, by Scott Sigler. The second single, "Swamped", was played in heavy rotation and used in the video game Vampire: The Masquerade - Bloodlines. It also appeared on the soundtrack for the movie Resident Evil: Apocalypse. Music videos were filmed for both songs and broadcast on MTV2s Headbangers Ball, which also had the band perform a live, acoustic rendition of "Heavens a Lie".

By 2004, Comalies had become the best-selling CD in Century Medias history. The band appeared at Ozzfest in between headlining club tours in the U.S.A. and Europe. A bonus, extended version of Comalies was released both in stores and on iTunes. This version consisted of both live and acoustic versions of the songs "Heavens A Lie", "Swamped", "Unspoken", "Aeon", and "Senzafine" from Unleashed Memories.

The band and label postponed the release of their follow-up to Comalies, Karmacode, to early 2006. According to the bands website, this made it possible for more time to be spent on production, and to avoid the crowded summer 2005 release schedule for metal albums. On December 23, 2005 the band announced on their web site that all recording, mixing, and mastering on Karmacode had been completed. It was then announced that Karmacode would be released in the USA on April 4, 2006.

During their 2005 European Tour, Lacuna Coil debuted two new songs from Karmacode at selected concerts: "Our Truth" and "Fragile" under the working titles "Antonio" and "A2" respectively.

Karmacode debuted at number 28 on the Billboard Charts. Considered by Billboard to be "the biggest album in the history of Century Media Records", it was acclaimed by music critics and magazines. Corresponding with the release of the new album, Lacuna Coil toured with Rob Zombie throughout North America in early 2006. After their tour with Zombie, they performed main stage at Ozzfest 2006 along with System of a Down, Ozzy Osbourne, and Hatebreed becoming the first female-fronted band to co-headline the heavy metal festival. That summer they also played on the main stage of the Download Festival (a three-day music festival in Englands Donington Park), which was headlined by Metallica, Tool, and Guns N Roses. That December, Lacuna Coil teamed up with In Flames, The Sword and Seemless for a U.S. Tour, as well as The Blackest of the Black 2006 Tour.

Four singles were officially released from Karmacode: "Our Truth", "Closer", "Within Me", and a cover of Depeche Modes "Enjoy the Silence." "Our Truth" was the first single released, and had a music video produced for it. The song was featured in the Underworld: Evolution soundtrack and entered the top forty on the U.S. Mainstream Rock charts.

The band toured extensively to support the album throughout 2007. This included the Jägermeister Music Tour, The Hottest Chicks in Metal Tour 2007 Loudpark Festival 07 in Saitama Citys Saitama Super Arena, and the Australian leg of Megadeths Gigantour.

Lacuna Coils first live DVD was released in November 2008, entitled Visual Karma (Body, Mind and Soul). The CD/DVD is a retrospective of all things from the bands "Karmacode" album cycle. The set list features concerts filmed at Germanys Wacken Festival and at the Japanese Loudpark Festival in 2007.

In 2008, it was announced that Lacuna Coils fifth studio album would be produced by Don Gilmore, and would have some Arabic influences. Cristina Scabbia announced to the magazine Rock Sound, "Its different, but its our style. We havent done anything absolutely different from our style, because that wouldnt be natural, that would be weird - it wouldnt be us. The songs are definitely more powerful, more complete, more intense, more straight-to-the-point". Andrea Ferro said, "Weve put more attention on the real meaning of the songs, so the vocals are a bit more prominent. Weve worked a lot with Don Gilmore on the pronunciation of the words in English, so people really understand the meanings of the words. There are strong choruses, where people can relate and really understand what we mean".

In February and March 2009, Lacuna Coil played at the Australian music festival Soundwave alongside metal acts including DevilDriver, In Flames, Lamb of God, and Nine Inch Nails. The festival spanned five capital cities, at which they performed their single "Spellbound", from Shallow Life for the first time. Early June saw them play in the UK at Download Festival. Their set was scheduled for the opening day, where they would play on the second stage just before Opeth and later Mötley Crüe. Later in July 2009, Lacuna Coil embarked on the American Spellbound Tour, alongside Kill Hannah, Seventh Void, and Dommin. This was Lacuna Coils first U.S. headlining run in over two years, and the first tour the band has been on since the Music as a Weapon Tour IV alongside Disturbed, Killswitch Engage, and Chimaira in early 2009. During Early 2010 (Jan/Feb) the band came to the United Kingdom to do a Headline "Shallow Life" tour with their support acts Dommin and Dirty Little Rabbits. They then returned to the UK again in September/October 2010 Headling the "Survive" tour, this time at more intimate/VIP venues, with the support act Slaves to Gravity.

A new album that was in the works since the first quarter of 2011 was confirmed with its title later being revealed as Dark Adrenaline. On September 2, 2011, it was announced that the first single from the record, titled "Trip the Darkness", was released digitally on October 17, 2011, with the albums release following on January 24, 2012.