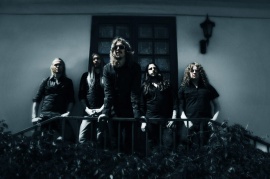 Opeth is a Swedish heavy metal band from Stockholm, formed in 1990. Though the group has been through several personnel changes, singer, guitarist, and songwriter Mikael Åkerfeldt has remained Opeths driving force throughout the years. Opeth has consistently incorporated progressive, folk, blues, classical and jazz influences into their usually lengthy compositions, as well as noticeable influences from black metal and death metal, most notably in their early works. Many songs include acoustic guitar passages and strong dynamic shifts, as well as both death growls and clean vocals. Opeth rarely made live appearances supporting their first four albums; but since conducting their first world tour after the 2001 release of Blackwater Park, they have led several major world tours.

Opeth has released ten studio albums, three live DVDs, three live albums (two that are in conjunction with DVDs), and two boxsets. The band released its debut album Orchid in 1995. Although their eighth studio album, Ghost Reveries, was quite popular in the United States, Opeth did not experience major American commercial success until the 2008 release of their ninth studio album, Watershed, which peaked at number twenty-three on the Billboard 200, and topped the Finnish albums chart in its first week of release. Opeth sold over 2 million albums and DVDs worldwide, including 300,000 collective Soundscans of their albums Blackwater Park, Damnation and Deliverance in the United States.

Opeth was formed as a death metal band in the autumn of 1990 in Stockholm, Sweden by vocalist David Isberg. Isberg asked former Eruption band member Mikael Åkerfeldt to join Opeth as a bassist. When Åkerfeldt showed up to practice the day after Isberg invited him, it became clear that Isberg had not told the band members, including the bands current bassist, that Åkerfeldt would be joining. An ensuing argument led to all members but Isberg and Åkerfeldt leaving to form a new project. The band name was derived from the word "Opet," taken from the Wilbur Smith novel The Sunbird. In this novel, Opet is the name of a fictional Phoenician city in South Africa whose name is translated as "City of the Moon" in the book.

Isberg and Åkerfeldt recruited drummer Anders Nordin, bassist Nick Döring, and guitarist Andreas Dimeo. Unsatisfied with Opeths slow progress, Döring and Dimeo left the band after their first performance, and were replaced by guitarist Kim Pettersson and bassist Johan DeFarfalla. After the next show, DeFarfalla left Opeth to spend time with his girlfriend in Germany, and was replaced by Åkerfeldts friend, bassist Peter Lindgren. Rhythm guitarist Kim Pettersson left following the bands next performance, and Lindgren switched to guitar. David Isberg quit in 1992 because of creative differences.

With three members in the band, Åkerfeldt took over vocal duties and the trio spent the next year writing and rehearsing new material. The group began to rely less on the blast beats and aggression typical of death metal, and incorporated acoustic guitars and guitar harmonies into their music; developing the core sound of Opeth. Stefan Guteklint joined on bass in 1991, but was dismissed by the band after they signed their first record deal with Candlelight Records in 1994. Opeth initially employed former member DeFarfalla as a session bassist for their demo recordings, and he went on to join on a full-time basis following the release of Opeths debut album in 1995.

Opeth recorded its debut album, Orchid, with producer Dan Swanö in April 1994. Because of distribution problems with the newly formed Candlelight Records, the album was not released until May 15, 1995, and only in Europe. Orchid tested the boundaries of traditional death metal, featuring acoustic guitars, piano, and clean vocals. Allmusic called Orchid "brilliant," "startlingly unique," and "a far-beyond-epic prog/death monstrosity exuding equal parts beauty and brutality."

After a few live shows in the United Kingdom, Opeth returned to the studio in March 1996 to begin work on a second album, again produced by Dan Swanö. The album was named Morningrise, and was released in Europe on June 24, 1996. With only five songs, but lasting 66 minutes; it features Opeths longest song, the twenty-minute "Black Rose Immortal". Morningrise was a huge success, with Allmusic giving the album four stars. Opeth toured the UK in support of Morningrise, followed by a 26-date Scandinavian tour with Cradle of Filth. While on tour, Opeth attracted the attention of Century Media Records, who signed the band and released the first two albums in the United States in 1997.

After the tour, Åkerfeldt and Lindgren dismissed DeFarfalla for personal reasons, without the consent of Nordin. When Åkerfeldt informed Nordin, who was on a vacation in Brazil, Nordin left the band and remained in Brazil for personal reasons. Former Amon Amarth drummer Martín López responded to a newspaper ad placed by Åkerfeldt and joined Opeth in 1997. López made his debut with Opeth playing on a cover version of Iron Maidens "Remember Tomorrow", which was included on the album A Call to Irons: A Tribute to Iron Maiden.

With a larger recording budget from Century Media, Opeth began work on its third album, with noted Swedish producer Fredrik Nordström, at Studio Fredman in August 1997. The band added bassist Martín Méndez shortly before recording, but due to time constraints Åkerfeldt played bass on the album. My Arms, Your Hearse was released to critical acclaim on August 18, 1998. As Opeths first international release, the album exposed the band to a wider global audience. My Arms, Your Hearse marked the beginning of a shift in the bands sound.

In 1999, the ownership of Candlelight Records changed hands, with owner and friend of the band Lee Barrett leaving the company. Opeth signed with UK label Peaceville Records in Europe, which was distributed by Music For Nations. Opeth reserved time at Studio Fredman to begin work on its next album, but recording was postponed while the studio was relocated. Due to time constraints, the band was able to rehearse only twice before entering the studio. Delays with the albums artwork pushed the release back an additional month and Still Life was released on October 18, 1999. Due to problems with the bands new distribution network, the album was not released in the United States until February 2001. Still Life was the first album recorded with Méndez, and also the first Opeth album to bear any kind of caption on the front cover upon its initial release, including the bands logo. Allmusic called Still Life a "formidable splicing of harsh, often jagged guitar riffs with graceful melodies." As explained by Åkerfeldt, Still Life is a concept album, "The main character is kind of banished from his hometown because he hasnt got the same faith as the rest of the inhabitants there. The album pretty much starts off when he is returning after several years to hook up with his old "babe." The big bosses of the town know that hes back... A lot of bad things start happening."

Following a few live dates in Europe, Opeth returned to Studio Fredman to begin work on its next album, with Porcupine Trees Steven Wilson producing. The band sought to recreate the recording experience of Still Life, and again entered the studio with minimal rehearsals, and no lyrics written. "This time it was tough," Åkerfeldt said, "I feel pleasantly blown away by the immense result, though. It was indeed worth the effort." Wilson also pushed the band to expand its sound, incorporating new sounds and production techniques. "Steve guided us into the realms of strange noises for guitars and voice," Åkerfeldt said.

Opeth released its fifth studio album, Blackwater Park, on February 21, 2001. Allmusic called Blackwater Park "astounding, a work of breathtaking creative breadth," noting that the album "keeps with Opeths tradition by transcending the limits of death/black metal and repeatedly shattering the foundations of conventional songwriting." In support of Blackwater Park, Opeth embarked on its first world tour, headlined Europe for the first time, and made an appearance at the 2001 Wacken Open Air festival in Germany, playing to a crowd of 60,000.